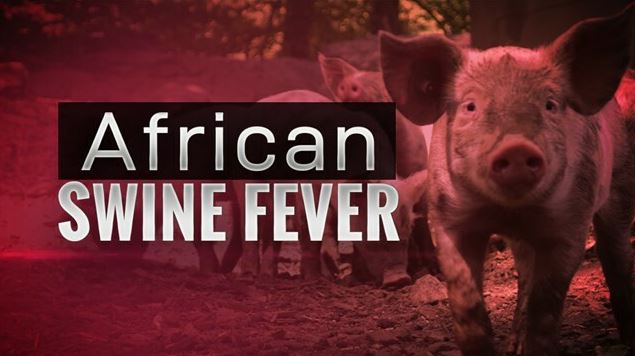 The Minister for Agriculture, Food and the Marine, Michael Creed T.D., wishes to strongly re-emphasise the need for airline travellers to be aware of the risk posed by African Swine Fever (ASF) to the Irish pig industry and the Irish economy if meat or meat products from affected animals is brought into the country. His warning comes on foot of reports from a number of countries (Australia, Japan and most recently Northern Ireland) regarding the detection of traces of the ASF virus in consignments of meat seized at airports.

The ASF virus is robust and can survive for weeks or months in chilled, frozen or preserved pig meat or meat products such as hams and salamis. Outbreaks of ASF have been attributed to the feeding of infected food waste (swill) to pigs, particularly in Asia, where swill feeding has only been recently prohibited. Feeding of food waste that contains or that may have been in contact with meat or meat products has been prohibited in Ireland since 2001.

The importation of meat or meat products into Ireland from non-EU countries is banned. Department staff, in conjunction with the Irish Customs Service, carry out checks on passenger luggage at our airports to detect consignments of meat and meat products.  These checks involve the deployment of risk-based searches of passenger luggage and the use of scanning equipment to detect meat or meat products in passenger luggage. Additionally, a sniffer dog is deployed at Dublin Airport.  In the first three months of 2019, 893 kg of illegal meat was seized by DAFM officials at Dublin airport. This product was disposed of under DAFM supervision in accordance with rules relating to the high- risk animal by-products (Category 1 material).

DAFM has also stepped up its awareness raising activities including the deployment of novel alternatives to the traditional posters at airports and ports. Checks at airports are only one component of the response needed by all concerned to address the current risk posed by ASF. The critical control measure that will protect Ireland’s valuable pig industry, is the implementation, by farmers, both commercial and hobby, of strict biosecurity measures on farm. Farmers must ensure that people do not have access to their pigs and that pigs cannot get access to material containing meat and meat products. Farmers, in particular hobby farmers, are reminded that waste food containing meat and meat products must never be fed to pigs.

Minister Creed concluded by saying that ‘We can keep African Swine Fever out of Ireland, if everyone including farmers, veterinary practitioners, industry representatives and members of the public play their part’.